At Novotel Phuket Resort we encourage our little guest to learn and experience this National Sport with our Kid’s Thai Boxing Class.

More than a souvenir, this also will teach them that this ancient art is not only a fighting training but also a way of living and respect.

Muay Thai is referred to as the “Art of Eight Limbs” or the “Science of Eight Limbs”, because it makes use of punches, kicks, elbows and knee strikes, thus using eight “points of contact”, as opposed to “two points” (fists) in boxing and “four points” (hands and feet) used in other more regulated combat sports, such as kickboxing and savate. 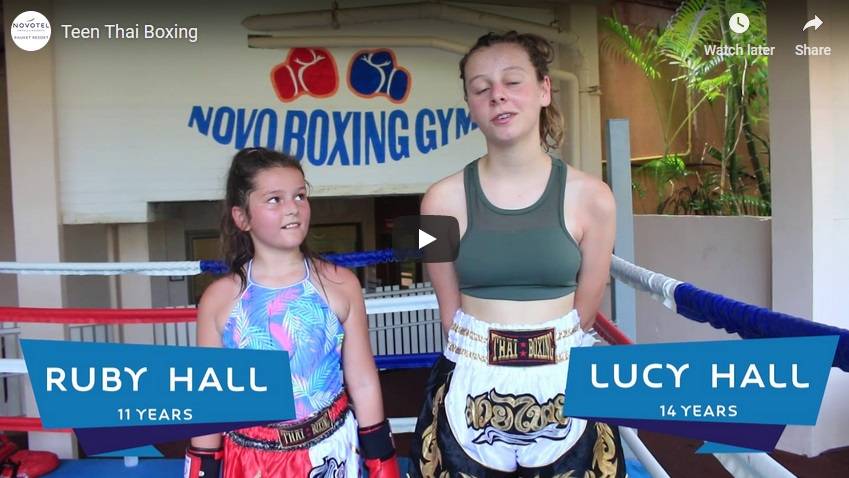 The history of Muay Thai can also be traced to the middle of the 18th century. During the battles between the Burmese of the Konbaung Dynasty and Siam, the famous fighter Nai Khanomtom was captured in the year 1767.

The Burmese knew of his expertise in hand-to-hand combat and gave him an opportunity to fight for his freedom. Nai Khanomtom managed to knock out ten consecutive Burmese contenders.

Impressed by his boxing skill, he was freed by his captors and allowed to return to Siam. He was acknowledged as a hero, and his fighting style became known as Siamese-Style boxing, later to be known as Muay Thai.

This fighting style was soon to be recognized as a national sport.

Muay boran, and therefore Muay Thai, was originally called by more generic names such as Toi muay or simply muay.

As well as being a practical fighting technique for use in actual warfare, muay became a sport in which the opponents fought in front of spectators who went to watch for entertainment.

These muay contests gradually became an integral part of local festivals and celebrations, especially those held at temples. Eventually, the previously bare-fisted fighters started wearing lengths of hemp rope around their hands and forearms.

This type of match was called muay khat chueak (มวยคาดเชือก). Kickboxing was also a component of military training and gained prominence during the reign of King Naresuan in 1560 CE.

View all photos
Book a room

The best of Novotel with Accor App Close